This bipartisan legislation is a historic moment for Michigan, as it permits thousands of Michiganders the opportunity to remove felony and misdemeanor convictions from their records, including misdemeanor marijuana offenses.

What’s also exciting is the automatic expungements of some felonies and misdemeanors, which means that in many cases, an application for expungement doesn’t need to be filed.

However, automatic expungements won’t become a reality until no earlier than April 2023.

These new laws are definitely difficult to understand.

Below, you can find a comprehensive summary of the new laws, which is helpful to both expungement attorneys in Michigan and lay people.

Are you interested in expungement? Unhappy with your current attorney? Request a free consultation now.

On August 23, 2021, Governor Gretchen Whitmer signed House Bills 4219 and 4220, which will allow anyone with only one (1) drunk driving conviction to seek to eliminate it from their criminal record.

After going into effect on February 23, 2021, DUI expungement will benefit more than 200,000 people in the state who are carrying a criminal record that’s impacting their lives in a number of ways.

If you’re interested, we highly recommend you start the process immediately.

“The Clean Slate” expungement laws that went into effect in early 2021 have been massively popular and the courts are overwhelmed with applicants.

The sooner you begin the DUI expungement process, the sooner you can get in front of a judge with the opportunity to have it expunged from your record.

Are you interested in discussing how DUI expungement applies to you? Would you like to start working with our attorneys on your expungement case so you can get your expungement request in front of a judge ASAP? Contact us immediately.

Sealing a Criminal Record vs. Expungement: What’s the Difference?

You may have heard the phrase “sealing” a person’s criminal record.

For instance, if sealed, your criminal record still “exists” both legally and physically; it’s just not readily available to the public.

Therefore, even if your record is sealed, it can still be obtained through criminal background checks for employment, insurance, gun ownership, etc.

This is why expungement is by far the most necessary and preferred route.

The new Michigan expungement law maintains the typical process, where a person eligible to have an offense set aside must demonstrate to the court that issued the conviction that they deserve the expungement.

This is now done through an evaluation of their actions from the date of conviction until the date of the petition.

Many more people are now eligible due to the expanded number of permissible felony and misdemeanor offenses, as well as a reduction in the number of years passed to become eligible.

Previously, Michigan felony expungement law permitted a person with no more than one (1) felony and two (2) misdemeanors to set aside the felony.

Additionally, someone with no more than two (2) misdemeanors could expunge one or both of their charges.

Now, a person convicted of one or more criminal offenses, but not more than a total of three (3) felony offenses may apply to have any or all of those convictions set aside.

However, there are some exceptions, such as:

The applicable minimum time periods are as follows:

The applicable time period begins on the latest date of the following:

Many Traffic Offenses Are Now Eligible

Michigan’s previous expungement law prevented all traffic offenses from being eligible for expungement.

Now, most traffic offenses are now eligible, with the following exceptions:

Further, an order setting aside a conviction for a traffic offense doesn’t require the conviction to be removed or expunged from the applicant’s driving record under the Secretary of State (SOS).

The offense will remain on the applicant’s driving record.

Multiple Felonies Committed at the Same Time Now Count as One

Prior to this new law, two felony convictions, no matter the circumstances, were ineligible for expungement.

However, the new law counts two (2) or more felony convictions as one, provided they were part of the same circumstance and committed within 24 hours of each other.

This new provision alone provides relief to a very large number of people.

However, this provision does not apply to:

SB681, approved by the Michigan Senate, created a process to automatically set aside certain offenses for youth who stay out of trouble and seal juvenile court records from public view.

Previously, those with juvenile records had to wait until they were at least 18 to apply for expungement.

This bill also removed the age requirement for eligibility and allows people to apply for expungement one (1) year after their court supervision ends.

It also allows traffic offenses to be set aside, which weren’t eligible under the previous juvenile expungement law.

Automatic expungement without an application kicks in two (2) years after the end of a juvenile’s court supervision, or when they turn 18; whichever happens later.

One of the most progressive changes to the current Michigan expungement statute is the addition of automatic expungement for both felonies and misdemeanors.

However, there are also many conditions, exceptions and exclusions to this provision.

To give the state time to figure out a system to implement this, automatic expungements will not begin until at least April 2023.

A felony or misdemeanor conviction shall be set aside without the filing of an application if both of the following apply:

Conditions to the Automatic Expungement Process

First, no more than two (2) felonies or four misdemeanors total can be automatically expunged during an individual’s lifetime.

Secondly, a conviction for a felony or misdemeanor could not be automatically set aside unless all of the following apply:

Eligibility for automatic expungement doesn’t apply to an individual who has more than one conviction for an assaultive crime.

In addition, automatic expungement for a felony or misdemeanor would not apply to the following convictions: 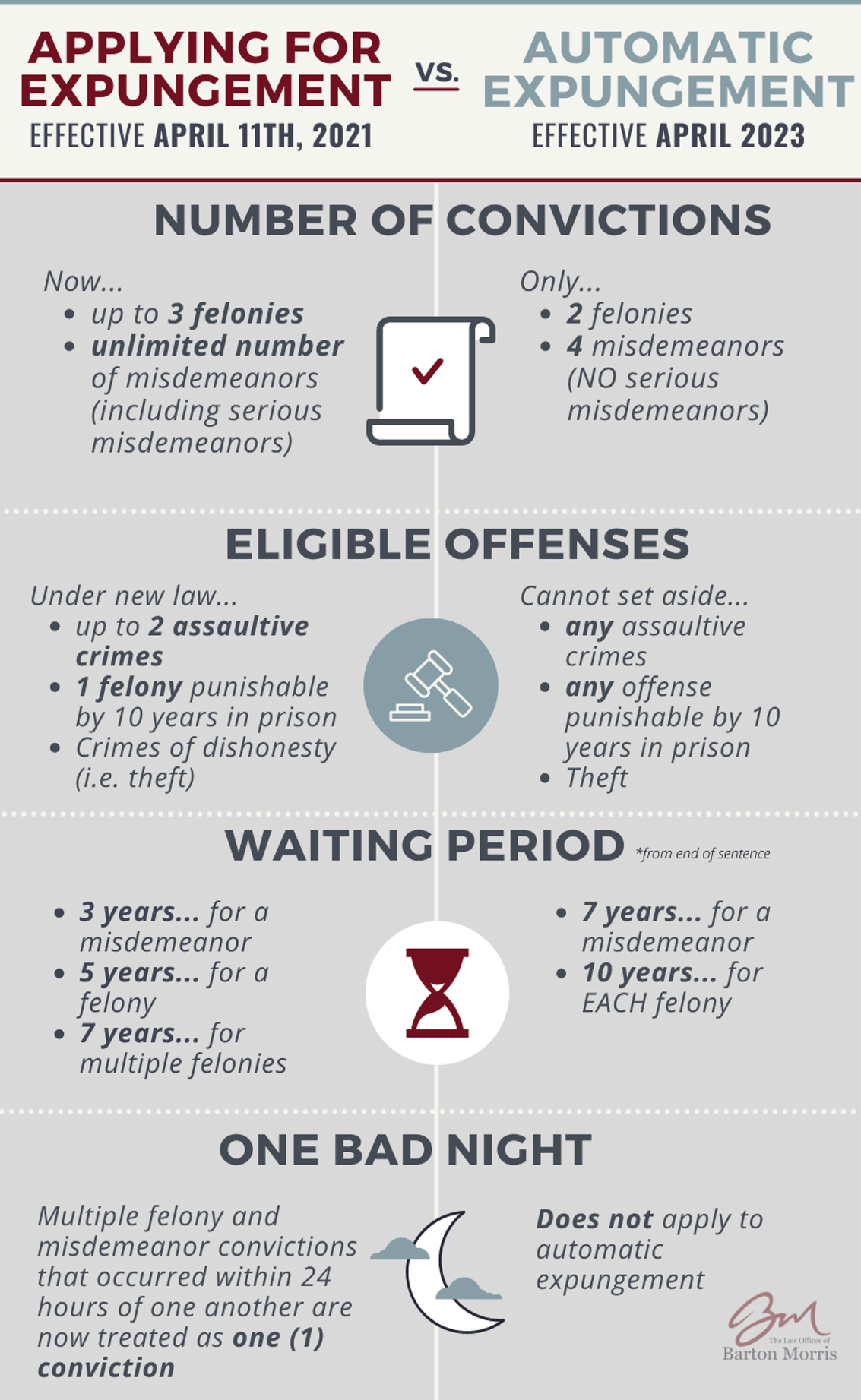 Expungement of Marijuana Convictions: Finally Something, But Not Enough

For the first time since the legalization of recreational marijuana on December 6, 2018, there’s now an opportunity to expunge misdemeanor marijuana offenses.

A person convicted of one or more marijuana offense can now file an application to have them set aside.

When filed, the reasonable presumption that the offense would have been lawful after December 6, 2018 arises.

The prosecuting agency who prosecuted the case has 60 days to object.

In this case, they will hold a hearing to prove that the conduct which caused the conviction is still a criminal violation.

Remember: being in possession of or cultivating up to two times the amount permissible is a civil infraction, not a criminal conviction.

Therefore, if someone was previously charged with the felony of growing 24 plants or less and the offense was plead as a misdemeanor, it’s eligible for expungement.

Growing up to 24 plants, while is two times more than what is permissible, is only a civil infraction under the Michigan Regulation and Taxation of Marijuana Act (MRTMA).

Unfortunately, this provision does not apply to felony marijuana convictions.

Excluded Offenses: Offenses That Are Ineligible For Expungement

The following offenses may not expunged, whether by application or the automatic process:

A automatically expunged charge may be reinstated if, during a motion of a person owned restitution or the court’s own motion, the individual has not made a good faith effort to pay court ordered restitution.

Under the automatic expungement provision, the obligation to pay restitution isn’t relieved when it’s owed to the victim of a crime, nor does it affect the jurisdiction of the convicting court with regard to enforcing restitution.

Additionally, a conviction, including any records relating to the conviction and any records concerning a collateral action that has been set aside under the act, cannot be used as evidence in an action for negligent hiring, admission, or licensure against any person.

The Takeaway in Michigan Expungement

Of course, the new law makes it clear that it doesn’t create a right to expungement; it remains a privilege.

This new law is effective now, with the automatic expungement statute not becoming effective until at least April 2023.

That said, this is a major step in criminal justice reform in Michigan and it should be applauded.

Start Now
Speak With Our Team

See also  Michigan State Police Lab Has Been Using The Wrong Method To Test THC in Blood for The Past 20 Years
michigancriminalattorney.com/attorney-morris/
Barton Morris2021-10-08T16:58:22-04:00