Our Award-Winning Team Can Help. 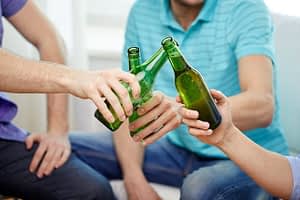 Charged With Underage Drinking in Michigan?

Did you know that police almost universally believe that a young person in high school or college out at night has been drinking or is about to drink alcohol? If you’re facing charges in Michigan, immediately speak with an underage drinking attorney.

This unfair presumption makes young adults under the age of 21 a target.

This article explains what a person under the age of 21 needs to know about the underage drinking in Michigan offense of MIP – Minor in Possession of Alcohol.

In the state of Michigan, an offense of Minor in Possession prohibits persons under the age of 21 to not only possess but also to consume alcohol and to have any amount of alcohol in their body.

The underage drinking in Michigan law prohibits the attempt to possess or consume alcohol by an underage person as well.

There are three primary ways that police enforce this law:

Actual or Constructive Possession of Alcohol

If a police officer personally witnesses a person under the age of 21 with a six-pack of beer, for example, this is actual possession of the alcohol and there’s not much more that can be argued.

But what if that six-pack is located in the back seat of a car with several people present?

If the beer was in a place that was inaccessible, then constructive possession cannot be proven.

Remember, proof of knowledge of the beer located in the back seat must be proven as well.

It’s not enough to presume knowledge.

If the passenger said, “I didn’t know the beer was there” and there’s nothing to prove otherwise, the passenger is not guilty of MIP.

The theories of actual versus constructive possession apply in all different factual circumstances like in a home or a park.

If you or a loved one has been charged with underage drinking in Michigan, request a free consultation by calling us now at (248) 206-5397.

The handheld Preliminary Breath Test (PBT) is frequently used by police to discover teenage drinking or determine if a person under the age of 21 has been drinking alcohol.

PBT’s are almost always carried by a police officer in their vehicle.

A teenager must remember that they don’t have to take a breath test or PBT and the only penalty is a civil infraction with a $100 fine.

To protect against being convicted of MIP a person should never submit to a breath test under any circumstances.

Even if a person hasn’t been drinking, PBTs can and will make mistakes.

The technology is not reliable enough for a prosecution of drunk driving in most states because they’re not highly reliable for several reasons.

For one, they’re not specific to ethyl beverage alcohol.

They can test positive for acetone which may be present if a person has diabetes or hypoglycemia.

They can also test positive for mouth alcohol instead of breath alcohol.

If a person just finished eating pizza, for example, the yeast in the pizza mixing with any sugar can cause fermentation of alcohol in your mouth.

Really, it happens all the time.

If the officer does not wait to give a PBT at least 15 minutes after eating, there could be a positive alcohol result even without drinking any alcohol.

PBTs also will detect alcohol from the surrounding (ambient) air. If alcohol, including products containing alcohol, was spilled and present in the immediate area it can cause a positive alcohol reading on a PBT.

Remember, you can’t be convicted without evidence.

A person under the age of 21 cannot be convicted of MIP under the following circumstances:

The consumption of alcohol by a minor who’s enrolled in a course offered by an accredited postsecondary educational institution in an academic building of the institution under the supervision of a faculty member isn’t prohibited by this act if the purpose of the consumption is solely educational and is a requirement of the course.

An experienced underage drinking (MIP) attorney can help you understand that charges against you as well as your options.