Possession of a Firearm, Pistol or Taser While Under the Influence of Alcohol or Drugs Is A Crime 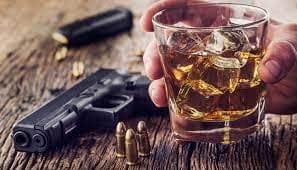 A permit and license to carrying a concealed weapon is a privilege that many citizens of Michigan have received and valued. Many believe it should be a right to carry a concealed pistol similar to the Constitutional Second Amendment, “right of the people to keep and bear Arms for the defense of himself and state.” But possession of a firearm, pistol, or taser while under the influence is a crime.

In fact, the State of Michigan forbids a person from carrying a concealed pistol or portable electro-muscular disruption device, or Taser, while he or she is under the influence of alcohol or any controlled substance.

Similarly, Michigan law states that an individual shall not carry a concealed pistol or Taser while having a bodily alcohol content (BAC) above .02 grams per 100 milliliters of blood, or 210 liters of breath.

Facing possession of a firearm under the influence or DUI charges? Unhappy with your current attorney? Request a free consultation now.

There are different penalties attached to different levels of bodily alcohol content or levels of intoxication.

The language is similar to drunk driving laws.

The penalty is a misdemeanor conviction punishable by up to 93 days in jail and automatic and permanent revocation of the license to carry a concealed weapon (CCW).

That penalty is the same for CCW with bodily alcohol content (BAC) of .10 or above.

If a person carried a concealed pistol or Taser with a BAC between .08 and .10, the penalty is a misdemeanor punishable by up to 93 days in jail and the court may order the CCW license be revoked for any period of time, but not more than three (3) years.

The court does not have to order any revocation when the BAC is less than .10, which is a big difference in penalty opposed to with a BAC over .10.

If a person carried a concealed pistol or Taser with a BAC between .02 and .08, the penalty is a civil infraction with a fine of not more than $100.

The court may order one’s CCW to be suspended for one (1) year.

In the event of this civil infraction, the court does not have to order suspension and most courts don’t; although, they do have to report the person was found responsible for a second or subsequent violation, but not the first violation.

Facing any type of gun or DUI charge? Unhappy with your current attorney? Request a free consultation now.

Determination of BAC may only be determined by a blood test using a Michigan State Police Blood Alcohol Specimen Collection Kit or with a breath alcohol evidential Datamaster BAC or DMT.

These are the exact methods as are used in drunk driving prosecutions.

The samples must be collected properly, administered reliability and interpreted accurately.

The persons collecting and analyzing the breath or blood samples must also be properly trained and qualified.

Before a breath or blood test is requested and administered, the police must notify the person that if the test is refused, it may result in the driver’s license being suspended or revoked.

Police, especially when also arresting someone for DUI, often neglect to advise the person of their chemical test rights (explained above) regarding the weapon.

This may be a helpful technicality in certain situations.

Specifically if a pistol or Taser may be locked in a trunk or, if the vehicle doesn’t have a trunk, locked in a locked compartment or container, this law will not apply to an intoxicated passenger in the same vehicle.

An intoxicated person may also transport a pistol on a boat or train if it is transported in a locked compartment or container that is separated from the ammunition for that pistol.

Our Best Advice? Keep Your Firearm In The Trunk If You Have Consumed Alcohol Before Driving

Similarly, Michigan law also prohibits a person who is intoxicated or has a BAC of .08 or more, from possessing or discharging a firearm, regardless of whether it’s concealed.

The penalty is a misdemeanor punishable by jail for up to 93 days.

If the offense results in a serious bodily injury to a person, the penalty is a felony punishable by up to five years in prison.

If the offense results in death, the penalty is a felony punishable by up to 15 years in prison.

In all circumstances, possession of a firearm while under the influence is a serious offense.

This law does not apply to constructive possession of the firearm in a home, because the Michigan Supreme Court has ruled that this is a violation of the Second Amendment of the United States and Michigan Constitutional right to bear arms in your home for protection.

“Constructive possession” means the weapon wasn’t directly located on a person but in the immediate area, like a closet or drawer.

To interpret the statute otherwise would mean that a person with pistol at their home would not be allowed to drink alcohol to the point of intoxication or BAC over .08.

Carrying, use, possession or concealment of a firearm, pistol or Taser under the influence of alcohol and/or drugs requires a defense attorney that understands and can effectively defend against breath and blood alcohol testing.

Having been specifically trained in this field, our attorneys specialize in the science of breath and blood alcohol testing as it relates to these offenses and can provide the best and most effective defense in court.

Facing any type of gun or DUI charges? Unhappy with your current attorney? Request a free consultation now.

See also  Boating Under the Influence In Michigan