What To Do If Arrested With An Expired Michigan Medical Marijuana Card? 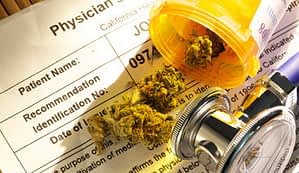 What do you do if you’ve been arrested with an expired Michigan medical marijuana card? You may still be covered under the medical marijuana shield if you have remained in substantial compliance with the Michigan Medical Marijuana Act’s three-prong Section 8 test.

First, let me start out by saying that it’s a terrible idea to smoke in your car.

According to Michigan case law, a police officer only needs to smell the odor of marijuana coming from your car in order to have probable cause to search it.

This means that a simple speeding ticket could turn into a misdemeanor possession charge quickly.

Therefore, it’s always advisable to avoid smoking in your car or wearing clothes that have been around smoke.

Marijuana has a distinctive smell that any officer will immediately detect.

Now that we have that situation covered, let’s talk about the two legal defenses provided by the Michigan Medical Marijuana Act.

There are two separate sections that can aid your defense.

For most clients, Section 8 can be a real lifesaver.

Many clients either forget to renew their card, or they’re in the process of renewing it without keeping the card valid.

Still, others have been using medical marijuana with their doctor’s knowledge without ever applying for a card.

If an officer pulls you over during these lapse periods, you’ll be charged with possession of marijuana.

So I Have Been Arrested For Possession. What Do I Do Now?

You should retain an attorney as quickly as possible in these matters.

A court-appointed attorney will not put in the work necessary for you to win a Section 8 motion.

In fact, this motion must be made before trial and it requires an in-court hearing.

If there are no disputes over the facts presented at the hearing, the case is dismissed.

If any questions of fact remain, the defense can raise the Section 8 defense at trial.

Section 8 motions are relatively rare as most law firms don’t know how to argue and win them.

However, why should you accept a deal to a charge that doesn’t apply to you?

Arguing a Section 8 motion is an excellent way to avoid a costly possession of marijuana conviction from hitting your record.

In order to prepare for your meeting, make sure you bring all of your medical marijuana paperwork.

Also, you should begin gathering your medical records.

All of these documents will be important for the attorney to review during your initial hearing.

See also  Boating Under the Influence In Michigan