Is Medical Marijuana And Concealed Carry Legal In Michigan?

Can a Michigan medical marijuana patient carry a concealed firearm? Yes, absolutely and legally, but only under the right circumstances.

There’s a lot of confusion when it comes to the legality of carrying, purchasing and possessing a firearm. This article was written in hopes of providing basic information about medical marijuana and concealed carry. In order to fully understand, it will require an explanation of both Michigan and Federal law.

First, it must be made clear that Michigan law does prohibit a person that’s under the influence of marijuana from being in possession of a firearm. Michigan does not prohibit a user of medical marijuana from obtaining a concealed carry permit.

The requirements for obtaining a permit to carry a concealed pistol include having none of the following:

As you can see, having a medical marijuana card isn’t on that list. Furthermore, it’s not a question on the application and the county clerk doesn’t have access to Michigan’s Department of Licensing and Regulatory Affairs’ (LARA) medical marijuana patient list. Law enforcement cannot access the list either (for this purpose).

Expungement to Get a CPL

“Unlawful User of or Addicted to Marijuana:” What Does This Mean?

Use and possession of marijuana remains unlawful under federal law. The federal government also prohibits a person from possessing a firearm if that person is an “unlawful user or addicted to a controlled substance.” Unfortunately, marijuana use for medicinal or recreational purposes isn’t a defense. It doesn’t matter if the state has provided the legalization or decriminalization of marijuana.

Rather, the defendant must have been engaged in use that was sufficiently consistent and prolonged, as to constitute a pattern of regular and repeated use of a controlled substance.

An “Unlawful” User of Marijuana is Prohibited From Purchasing a Firearm

To purchase a firearm from a federally licensed firearms dealer, a person must fill out an ATF Form 4473. This form asks the following:

Are you an unlawful user of, or addicted to, marijuana or any depressant, stimulant, narcotic drug, or any other controlled substance?

If the applicant checks the box “yes,” their application will be denied. Additionally, it’s a felony to lie on a federal form. 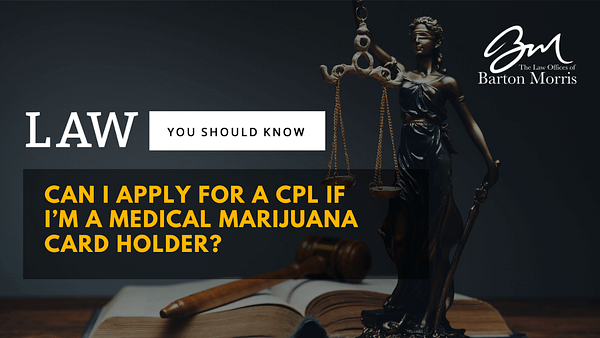 If a medical marijuana patient is a regular user of marijuana, and of course many of them are, they can get a permit to carry a concealed pistol (CPL), but they’re in violation of federal law by being in possession (even if not concealed) of a firearm. It’s unfortunate, but until federal marijuana policy changes, this is the law.

If a felony conviction is the only thing preventing you from obtaining a CPL, you should look into expungement. Should your conviction(s) be eligible for expungement, and we’re successful in helping to get it removed from your record, you’ll be able to get your CPL should all other conditions be met.

*Warning: The use or possession of marijuana remains unlawful under federal law regardless of whether it has been legalized or decriminalized for medicinal or recreational purposes in the state where you reside.