Prescription Medication and DUI, Learn How to Prove Your Innocence 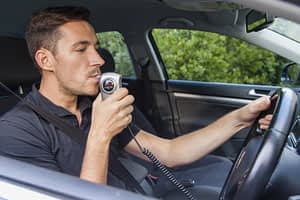 You’re no doubt aware of “drugged driving.” While the name sounds like it would only pertain to people operating a vehicle with heroin or cocaine in their system, the list of substances that will find you in hot water is quite long. This article covers drugged driving, including prescription medication and marijuana DUI.

When you’re pulled over, the officer will ask you the basic questions: “where are you coming from?” and “have you had anything to drink tonight?”

Your answer to these questions will be very important.

If you inform the officer that you’ve taken a prescription medication or drank alcohol, a DUI investigation will occur.

Prior to the inception of roadside drug testing, officers had to rely on a good ole’ DUI investigation.

If you admit to drinking alcohol, officers will put you through the Standardized Field Sobriety Tests (Horizontal Gaze Nystagmus, Walk and Turn, One Leg Stand).

However, while these tests can show impairment by alcohol, they have very little correlation to impairment caused by controlled substances.

Due to the differences in how controlled substances (Norco, Xanax, Cannabis, Adderall, etc.) affect you, “experts” determined that three additional tests can be “beneficial” in determining impairment.

This was the beginning of the Drug Recognition Expert (“DRE”) training program.

What is a Drug Recognition Expert?

Many officers will not have this training and will solely rely on what they’ve heard may be the proper way to evaluate your performance on their field sobriety tests.

If an officer claims to be a DRE, it’s vitally important to ensure they’ve been properly trained and have performed well in the field.

To begin this investigation, they’ll ask you to do three tests; Vertical Gaze Nystagmus, Modified Romberg, Lack of Convergence.

These tests have specific “cues” (instances of designated errors) which an officer is trained to look for.

Therefore, only a DRE should be interpreting these field sobriety tests designed for controlled substance impairment.

If the officer hasn’t had the proper training, they shouldn’t be making a determination as to your impairment.

What is This Roadside Test?

Introducing the Alere DDS 2 Mobile Test System. This test is administered in a manner similar to the roadside preliminary breath test. A driver will be asked to provide an oral fluid sample.

A DRE will request that an individual submits to this roadside test, with a civil infraction being issued for a refusal. From here, several scenarios can occur:

If you don’t have a prescription for the substance that you consumed, the prosecutor has a much easier time proving your guilt.

ADVICE: Do not use someone else’s prescriptions. If you have a condition for which medication is needed, get a prescription. Without a valid prescription, proving your innocence becomes a much tougher battle.

What About My Prescription Medication and DUI?

Unfortunately, the officer will not care whether or not you have a prescription for the medication you took when it comes to a DUI.

If he/she determines that your use of the medication impaired your ability to operate a vehicle, you’ll be arrested for Operating While Intoxicated/Operating with the Presence of Drugs.

At this point, it will be up to your attorney to explain that you weren’t in fact impaired by the medication.

This can be proven through numerous channels.

For instance, your performance on the Standard Field Sobriety Tests was most likely captured on the officer’s In-Car video system.

Officers will often exaggerate your poor performance on these tests, so it’s crucial that your drug defense attorney knows how to evaluate the tests as well.

Moreover, an effective cross-examination of the DRE’s observations and impressions is important to uncover potential issues with the investigation.

How Reliable Is The Test?

The short answer is, reliable enough for prosecution if done correctly.

The most recent study on the Alere DDS 2 mobile test system shows it has the capacity to be used roadside to complement a DRE’s investigation.

However, this study was performed by individuals who are employed by a subsidiary of Alere, Inc., the company that makes the device in question.

Therefore, until more studies from independent organizations have been conducted, challenging the accuracy of the test should be a common defense technique.

Moral of the Story

Don’t operate your vehicle if you have taken a controlled substance that could impair your ability to do so safely.

If you do find yourself in a situation involving a DRE or a roadside test, get an attorney immediately.

Obtaining the records you need for your defense can take some time, so getting ahead of the charges is incredibly important.

Also, make sure that the law firm you choose is qualified and trained to challenge such dense material.