Whip-Its – Nitrous Oxide And Other Inhalants – Legal to possess, Illegal to Inhale 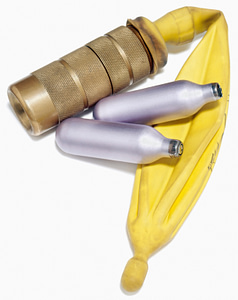 Have you ever inhaled the compressed air in the whipped cream can in your (or your friend’s) refrigerator for the quick high it gives you? If you did you committed a misdemeanor pursuant to Michigan Law. The gas that forces the whipped cream out is nitrous oxide. It comes in a few different forms. You can buy them, over the counter, in packs from 12-24 small canisters called whip-its.

Charged with whip-its or another inhalant drug crime? Unhappy with your attorney? Request a free consultation now.

Each canister can be placed in a dispenser that’s supposed to be used for making whipped cream.

Instead it can be directly (with the use of a balloon) inhaled into the human body for a high that lasts for 30 to 45 seconds.

A dentist will usually have a 10 to 20 pound nitrous tank.

Combine the tank and a package of balloons and a whole party can get high for hours.

Despite the fact that it can be legal to possess the nitrous, it’s illegal to inhale it for a buzz.

There are not many drugs with that same legal distinction.

In Michigan, besides marijuana, inhaling anything to get high is illegal, whether it contains nitrous oxide or not.

The law specifically says that inhaling any chemical agent to cause intoxication, euphoria, excitement, exhilaration, or to dull your senses is a 93-day misdemeanor and carries fines up to $100.00.

Legal Consequences for Whip-It Use

Simply giving a person a whipped cream can so that the other person can get high is also a crime, but much more serious because it contains nitrous oxide.

A person can find whip cream in nearly any grocery store.

Whip its are sold over the counter at head shops everywhere.

The ease of finding it probably attributes to the fact that inhalants are the fourth most-abused substance after alcohol, tobacco, and marijuana.

Aside from causing you legal trouble, whip-its and other inhalants can also cause loss of consciousness, mouth and throat injury, liver and kidney damage and long-term nerve damage.

Not to mention, inhalants deprive your brain of oxygen. Imagine yourself being strangled – same thing.

Whip-its containing nitrous oxide have even been known to freeze your face just like frostbite.

Charged with whip-its or another inhalant drug crime? Unhappy with your attorney? Request a free consultation now.

See also  Michigan State Police Lab Has Been Using The Wrong Method To Test THC in Blood for The Past 20 Years
michigancriminalattorney.com/attorney-morris/
Barton Morris2021-08-23T16:56:19-04:00
Page load link
Navigation
Follow Us
Go to Top