What To Do If Pulled Over After Smoking Marijuana? 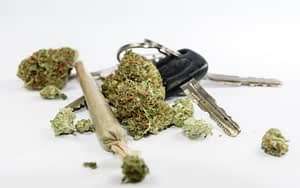 With the legalization of both medical and adult-use marijuana in Michigan, marijuana use continues to become more accepted. However, smoking marijuana while driving or driving while “intoxicated” by marijuana is still explicitly illegal according to Michigan law. But what if you consumed marijuana earlier in the day, waited a few hours and then drove a motor vehicle when sober only to get pulled over? This article covers what do if if you’re pulled over after smoking marijuana.

Difference Between Alcohol and Marijuana

Often during a traffic stop, the driver will be asked, “have you used alcohol or drugs today?” by a police officer.

Unlike alcohol, there are multiple ways to consume cannabis, such as:

Each method results in slightly different physical and mental effects due to each individual absorption process.

While smoking cannabis bud, THC enters the lungs then passes from the lungs into the bloodstream, which then enters the brain.

The effects of marijuana begin quicker, however last for a shorter period of time than edibles.

This is why the case for marijuana impairment isn’t as clear cut as alcohol, since the mediums it can be consumed in range vastly.

Do I Have to Take a Standard Field Sobriety Test?

Don’t feel obligated to answer the question above simply because a member of law enforcement asked you to.

This is because if a police officer believes that you may be under the influence of marijuana while driving, they’ll continue that investigation.

You don’t want to give them more reasons to incriminate you.

The investigation will likely progress in the following steps:

For more information on what to do if you are pulled over after smoking marijuana, watch below >>

Hire a Lawyer Immediately After Your Marijuana DUI Arrest

While we don’t condone nor encourage driving under the influence of marijuana whatsoever, it’s important that Michigan residents know their rights if they face this scenario.

The legalization of recreational marijuana is something law enforcement is still catching up to, so mistakes are expected to be made that unfortunately can unjustly alter someone’s life.