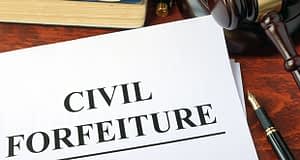 They target certain types of cases and people whom they believe will be more likely to lead to the seizure of cash and valuable property.

Often times, they don’t have enough evidence to get a warrant or even criminally prosecute the case.

Then they settle a civil case to keep as much of the property or money as possible.

A criminal case doesn’t even have to be prosecuted or a conviction received.

All forfeited funds are kept by law enforcement to spend on “law enforcement purposes” which can include increased pay in the form of “overtime,” “equipment” and “personal.”

Have your assets been seized? Unhappy with your current attorney? Request a free consultation now.

It seems like the Oakland County Executive Mark Hackell, with whom they have a public dispute, complained that Smith was unlawfully misappropriating forfeited funds.

This allegation illustrates the reason that there must be civil asset reform.

Forfeit assets and cash are supposed to be used for “law enforcement purposes,” which is extremely broad and vague.

There are records to demonstrate that Smith was spending large sums of money on things like security upgrades, food and catering, country club retirement party and even “donations” to a non-profit.

Michigan’s Civil Asset Forfeiture Laws were introduced primarily to take the things that drug dealers use to facilitate their crimes and to take the valuable property they may have purchased with the proceeds of their unlawful actions.

Things like the vehicles in which they transport the drugs and the jewelry, cars or homes purchased with the illegal funds.

Quite naturally, the law had to figure out what to do with the property.

They decided it would go to law enforcement.

Law enforcement often seeks search warrants to search a home or business to recover evidence of a crime but what they’re primarily seeking is cash.

Unfortunately, there’s something in the law called the “good faith exception” which means that even if the request warrant wasn’t supported by enough evidence, as long it’s demonstrated that they sought the warrant in good faith, the evidence recovered will still be used against the defendant and the property seized still remains subject to forfeiture.

For this reason, law enforcement will always go to a judge or magistrate whom they believe is most likely to sign the warrant.

This is why we frequently see a magistrate from another city sign a warrant for a search in a different city.

What is Subject to Forfeiture?

Michigan law permits the police to take (aka seize), without a hearing, conviction or even probable cause, property they “believe” was purchased with proceeds from drug dealing, or money received from drug dealing.

It permits them to take any cash in “close proximity” to any amount of a controlled substance.

The amount doesn’t have to evidence an intent to sell.

They can also seize any vehicle, plane or boat in which controlled substances were transported.

After the seizure, they hold that property until the owner files a written claim for its return.

If a claim isn’t filed within 21 days, they keep it.

If they file the claim, then a civil forfeiture action is started in court which can take months.

Despite the strength of their evidence, over 95 percent of these cases get settled so the police almost always get something.

It also doesn’t matter if any underlying criminal case results in a conviction.

This law leads to a significant potential for abuse.

Any vehicle that’s traveling with any amount of a controlled substance like cocaine or a medication possessed without a prescription allows the police to take that vehicle.

Policing For Profit – Where the Money is Spent

There were also 5,800 instances of forfeiture involving controlled substances.

This is a complete travesty of justice.

What’s even worse is that now there’s evidence to suggest that the agencies in receipt of these funds are misappropriating them.

Standard of Proof and Necessity of Conviction

During a civil forfeiture case, the police must prove by “clear and convincing” which means that there must be a firm believer in the truth of the allegations that the evidence that the seized property is subject to forfeiture.

This is a much lower standard than in a criminal case where the police evidence must be proved beyond a reasonable doubt, the highest standard that exists.

Even when the evidence of drug dealing isn’t strong enough to secure a criminal conviction, it may easily justify the taking of the accused property.

A condition isn’t a prerequisite.

Where We Are Today

As long as the law enforcement agencies and the prosecuting attorney directly benefit from the funds, they’re encouraged to violate the rights of others.

They’ll therefore continue targeting those they can take money from instead of those who are most dangerous to the public.

Then they take that money and spend it as they please.

This all needs to change.

Have your assets been seized? Unhappy with your current attorney? Request a free consultation now.