Before talking to the police, talking to a skilled attorney to determine what domestic violence defense is available to you may be the difference in what grants you a conviction or an acquittal.

There are four main categories of defenses to a criminal charge:

It’s important to review all possible defenses with an attorney to see which defense, or combination of defenses, is best suited to the facts of your case.

Each criminal offense has a list of facts, called elements, that the prosecutor must prove to generate a conviction.

In a domestic violence case, the prosecutor must prove two elements:

1. That the accused assaulted and/or battered an individual An assault is an action or indication that makes someone reasonably afraid of imminent battery, which is harmful or offensive touching.

Battery is the offensive or harmful physical contact itself.

Therefore, it’s possible to assault someone without battering them, batter them without assaulting them, or to both assault and batter them.

Michigan Law lumps assault and battery together as one element of the domestic violence charge.

2. That at the time of the assault the accuser was one or more of the following: The accused’s spouse or former spouse, had a child in common with the accused, is a current or former household member of the accused, or was a person with whom the accused had a “dating relationship.”

How Does the Defense Apply?

Often, the only witnesses to an alleged incident of domestic violence are the accused and the accuser.

Since proof of the elements listed above often depends entirely on the testimony of the alleged victim, it’s vital to hire an attorney who has extensive experience cross-examining witnesses in court.

An experienced domestic violence attorney can evaluate an accuser’s recorded statements and discuss credibility issues with the accused.

They’ll also conduct a complete investigation into any other evidence of the alleged incident, including 911 calls or body camera footage from responding officers.

Therefore, it’s important for your attorney to review all the evidence to determine whether the accuser’s story is consistent.

In a “he said/she said” case, consistency is everything.

Although rare, it’s also possible to challenge the relationship between the accused and accuser.

A “dating relationship” is defined as an intimate association characterized by the expectation of affection involvement.

The relationship status might be at issue, for example, when the accuser has only been on a few dates with the accused.

Domestic Violence Defense #2: It Happened, But It Wasn’t Me

While the identity of the accused is typically not an issue in a domestic violence case, the prosecutor still must prove beyond a reasonable doubt that the accused was the person who committed the offense.

How Does the Defense Apply?

This defense attacks the identification of the accused as the person who committed the alleged crime.

It states that the evidence proves the elements of the crime, but not the fact that the accused is the person who committed that crime.

Forensic evidence, such as DNA or fingerprints, conflicting eye-witness descriptions, and alibis are often used to undermine the prosecutor’s evidence that the accused is the person who committed a crime.

Many are wrongfully accused (and sometimes wrongfully convicted) based on bad identification.

Domestic Violence Defense #3: It Happened, But My Actions Were Justified or Excused

This is a much bigger umbrella of possible defenses than the prior two, because there are several ways that someone’s violent conduct might be justified or excused according to the law.

The most common and well-known justification defense is self-defense or defense of others.

In Michigan, a person is entitled to use force to protect themselves from the “imminent unlawful use of force by another.”

While self-defense is available to someone claiming they used force to prevent or stop a domestic assault on someone else, the defense is not available at trial where the accused and the accuser have a “domestic” relationship as discussed above.

If there’s evidence of mutual combat, then it’s important for your attorney to review all the facts of your case to discuss with the prosecutor whether dismissal is possible.

Michigan law also considers “not guilty by reason of insanity” as well as “guilty but mentally ill.” These defenses are highly fact-specific and require an evaluation by an attorney and a forensic psychologist.

In every criminal case, both the police and the prosecutor’s office must conduct their investigations and prosecutions consistent with the law.

This means respecting and honoring an accused’s constitutional rights as well as complying with other relevant legal requirements governing the collection, preservation, and disclosure of evidence against the accused.

However, there are sometimes flaws with police investigations that are often overlooked.

It’s important for your attorney to review the police investigation to make certain it’s consistent with the law.

For example, the police need probable cause to make a warrantless entry into a home without the owner’s permission.

If the police didn’t comply with the law during their investigation, a skilled criminal defense attorney can have a judge suppress the evidence that was unlawfully obtained.

Without admissible evidence, the prosecution may not be able to prove all the elements of the charged offense beyond a reasonable doubt. 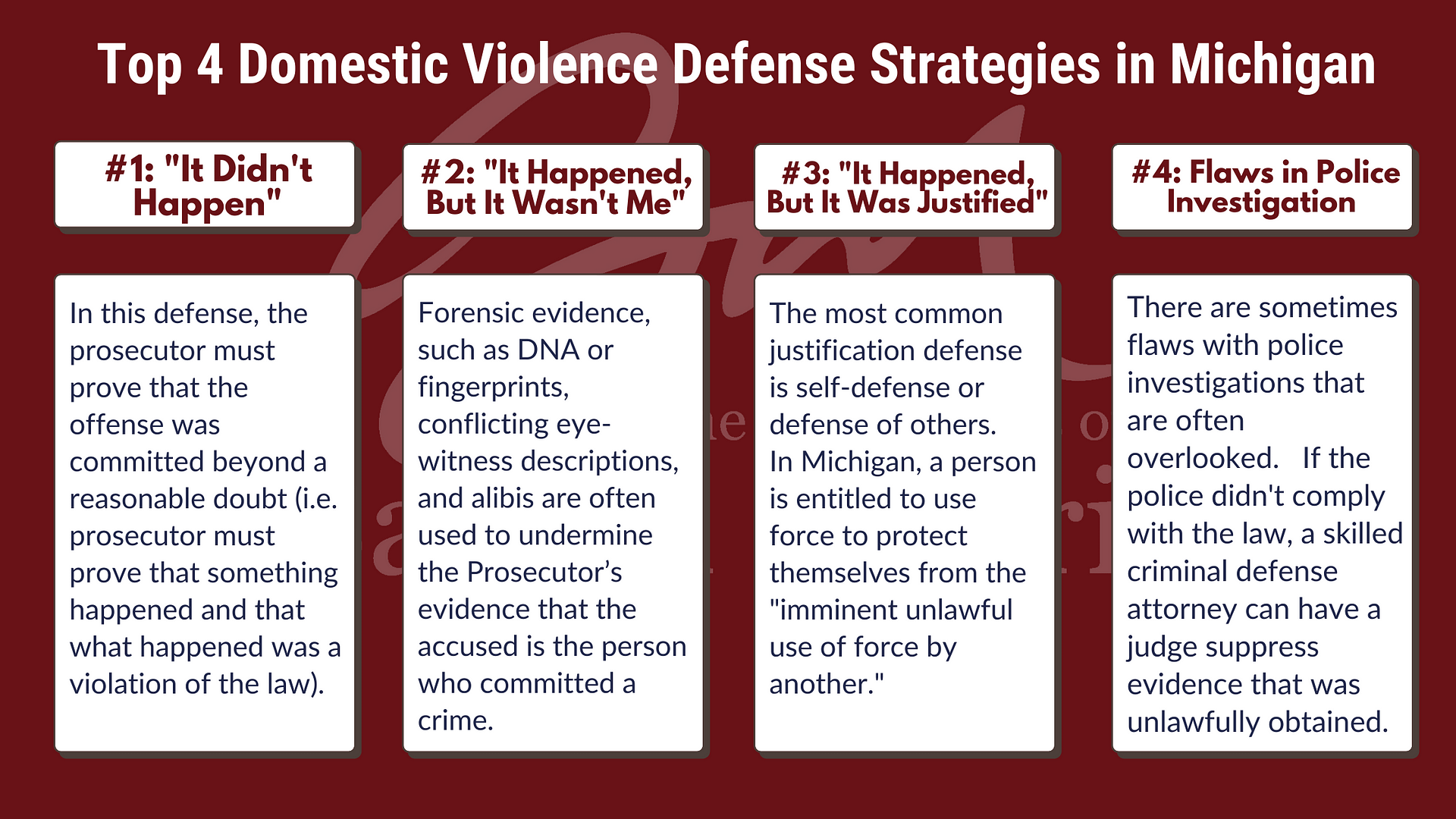 What Domestic Violence Defense Strategy Should I Use?

We’ll immediately review the facts and circumstances of your case and help you develop a strategy for going forward, which will include one of these four domestic violence defense strategies.