How to Defend a SCRAM Violation

Advice for SCRAM Users and How to Defend a Violation 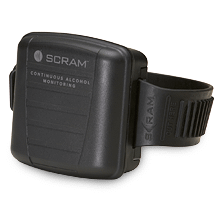 The SCRAM tether is a continuous alcohol-monitoring device that’s frequently used by judicial systems, judges, probation departments and jails to monitor a person to determine if they’ve consumed alcohol. SCRAM isn’t a generic term as there exists only one company that sells, administers, and services the product. That company is Alcohol Monitoring Services (AMS) located in Colorado. The device is used all over the country.

Although the device is proprietary, the science it uses isn’t. The SCRAM uses transdermal perspiration screening which analyzes the vapor and sweat immediately above the skin and tests it for alcohol.

The actual alcohol test is conducted with a fuel cell which oxidizes the vapor sample and changes it into an electrical signal which when can be qualified (identified) then quantified (measured). If a substance is identified as alcohol, it’s then measured and the amount is then plotted on a graph. Wearers of the device will feel and hear a small vibration every time it tests for alcohol.

In response to persons who may attempt to thwart its effectiveness the device is equipped with anti-tampering technology in the form of an infrared sensor and thermometer which is designed to alert any changes from its original settings when fitted.

Alcohol comes in many forms such as isopropanol, methanol and of course, ethyl alcohol which is the type consumed by people. The SCRAM device isn’t specific to ethyl alcohol meaning the fuel cell device will detect other types of alcohol and report them equally.

How does the device know when someone has been drinking alcohol?

The answer is that it doesn’t but the people who analyze the data should.

The data, which is plotted on a graph, is downloaded to AMS who employs a team to review and interpret the data. This team is trained to understand the necessary science behind transdermal alcohol screening and specifically, ethyl alcohol’s absorption and elimination rates in the human body. When a person consumes alcohol it takes a scientifically determined amount of time to reach the skin before it can be screened by the SCRAM. This time frame is known as the rate of absorption of and elimination of alcohol. Therefore if the graph demonstrates a rate of absorption and/or elimination that isn’t humanly possible the analyst shouldn’t report an ethyl alcohol consumption event. The analyst isn’t always right. Only the data being sent to the analyst is being interpreted. They don’t consider any other sources of information including environmental factors and alcohol from other outside sources.

There are many household products that contain alcohol that will be detected by the SCRAM which include lotions, perfumes, hair products and cleaning products such as Lysol. Generally, when any of these products are introduced to the SCRAM from outside the body the fuel cell will report the alcohol it detects. The presence of this alcohol is generally short lived. Therefore, if perfume that contained alcohol was sprayed directly onto the unit’s detector, it would cause the data represented on the graph to quickly rise and quickly fall which scientifically could not be a consumption related event and thereby ignored.

If the substance was continuously present for a lengthy period of time and then removed at a rate consistent of the elimination rate of ethanol from the human body, a non drinking event may be interpreted as an alcoholic consumption event. This could easily mean very severe consequences including the incarceration for violating a court order not to drink alcohol.

The substance can also be consumed by the human body and excreted through the skin at levels consistent with the rates of ethyl alcohol. Brass instrument players are familiar with the lubricant that’s used to ease the operation of the valves on a trumpet, trombone or tuba. The most common lubricants contain alcohol. While playing these instruments the player inhales frequently and it has been determined that the alcohol inhaled from the lubricant is processed through the body and can be excreted through the skin. Case studies have shown this occurrence to be falsely interpreted as an ethyl alcohol consumption event causing the unfair risk of a probation violation and possibly jail. Thankfully, in this specific case the misinterpretation was discovered and the violation dismissed. Because of the general lack of understanding about transdermal alcohol monitoring many people are accused falsely are not as fortunate and suffer severe consequences that are not deserved.

To avoid undeserved consequences and false positive results a SCRAM user should do the following:

Be aware of the alcohol content of all products a user comes into contact with and avoid products that contain it especially if it’s consumed orally.

Always be aware of how often the SCRAM device is testing samples. If it seems that it’s testing with a higher frequency than when the device was first fitted make note of what could be causing any positive alcohol readings. Once determined document the times, dates, products and witnesses with all available means including video, writing, photographs. Follow up with taking a breath test at a local police station or probation office. A documented negative breath test during a SCRAM alcohol reading will demonstrate the device’s limitations and bring the truth to the judicial system that this technology is subject to error.

Understand the fundamentals of transdermal testing. Take the time to read about the science upon which the SCRAM replies.

Also, ensure that your attorney is familiar with the science and how the SCRAM works. It may save your freedom.