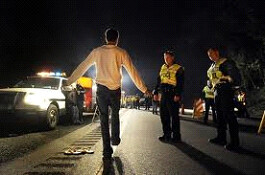 There are three phases of an OWI arrest, so why does the prosecution want to spend the most time on phase three – the standardized field sobriety tests?  I’ll tell you why, it’s because the first two phases deal with common sense judgment and that is exactly what they don’t want the jury using!

Any criminal OWI attorney who is worth her (or his) suit will carefully scrutinize the first two phases before they even touch the sobriety tests.  They will do this because most people like to know what happened in the order it actually happened.  If everyone automatically jumps to some sobriety tests done on the side of the road a big chunk of the driver’s behavior is simply left out.  And this isn’t fair.

It’s not fair to the driver being accused of driving impaired and it’s not fair to a juror who is being asked to make a serious decision based on the totality of the circumstances, but then is only given part of the story.

The three phases of an OWI arrest include: (1) the vehicle in motion, (2) personal contact with the driver, and (3) the standardized field sobriety tests.

Phase One Of An OWI Arrest (The Vehicle In Motion)

Officer are trained to first observe the vehicle in motion. They look for vehicle maneuvers or human behavior that may be associated with impairment.   What does impairment look like to an officer?  Good question.  According to the National Highway Traffic Safety Administration (NHTSA) it can look like a lot of things.  Here are just a few examples of suspected “impaired” driving that is likely to get you pulled over:

The list goes on and on, but one thing is  clear :  There are a lot of normal behaviors that will give the officer reasonable suspicion to pull you over on the suspicion that you were driving impaired.

A good attorney will show the jury how this “abnormal” behavior is actually quite normal.

Once the officer has performed the traffic stop he will approach the driver.  Officers are trained to notice signs of impairment when they have contact with you.  Again, NHTSA has given a list of behaviors that it has categorized as indicators of impairment.  The list includes:

A good OWI attorney is able to point out some of the ridiculous things that an officer says are indicators of impairment.   I’m certain that there is more than one juror sitting in the box that has driven while wearing a bump or bruise on their body or with soiled clothing.  I’m also certain there is at least one juror who has had bloodshot eyes or who has been nervous and fumbled their fingers while trying to grab something while being completely sober.

And here we are.  The prosecutor’s favorite area.  The prosecutor will emphatically point out to the jury how these tests are scientific indicators of impairment and that if an accused has failed them it means they were impaired.

The three tests that are given on a regular basis include: (1) The Horizontal Gaze Nystagmus  (HGN), (2) The Walk and Turn, and (3) The One Leg Stand.

Horizontal Gaze Nystagmus Nystagmus simply means involuntary jerking of the eyes.  The officer will look to see if a person’s eyes are  jerking while just looking straight ahead and following an object with their eyes horizontally, and just prior to the eyes reaching a 45 degree angle.

While the test itself may be scientific in nature, the reason a person’s eyes may involuntarily jerk does not always indicate impairment.  For example, disruption of a person’s balance can cause the eyes to jerk.  Also, anti-depressant medication or having a vitamin deficiency (specifically B12 or thiamine) can cause a person’s eyes to jerk as well.  Does this mean the person is intoxicated? No.

When administering the HGN test, the officer is also looking for something called lack of smooth pursuit.  What this means is that while your eyes are tracking an object in a horizontal line, the officer is making sure that your eyes are doing it in a smooth manner.  Medication, being off balance, moving your head while doing the test and tumors or past concussions can cause the eyes to jerk during this test.

It’s important for a drunk driving attorney to make sure the officer is performing these tests correctly.  Sometimes you will see an officer holding the stimulus to be followed to high above eye level.  This causes the eyes to move in an arch, which is not horizontally!

It’s important for attorneys to watch for this.

The Walk and Turn and One Legged Stand are tests designed to divide your attention.  These tests were established by NHTSA so that when properly administered are supposed to indicate impairment if failed.  Both of these tests have an instruction phase and then a performance phase.  The catch here is this.  Before the officer begins giving you the instructions he has you get in position to take the test.  For the walk and turn that means you stand on an invisible line with your right foot in front of your left (heel to toe) and your arms down to your sides.  So, before you even begin the test you are standing for about a minute and a half in an uncomfortable off balance position.

Your attorney should point out to the jury that the officer is taking away half of a person’s balance but then scoring him as if he had 100%.  How often do you normally walk heel to toe with your arms flat against your sides?  Probably never.

As far as the one legged stand goes, it’s just plain unnatural.  We are humans not flamingos.  Standing on one leg for a period of time can be difficult for a dozen reasons that have nothing to do with being impaired.  Muscle strength, a person’s age, a person’s medical condition and maybe just a person’s natural clumsy trait should all factor into this.  The prosecutor isn’t going to bring it up.  It’s up to your attorney to make sure that these things are brought to the juror’s attention.

If your attorney can show the jury just how unnatural these tests are and how some “abnormal” behavior is actually quite normal you have won half the battle.  All the jury needs to have is a reasonable doubt about your impairment and creating reasonable doubt shouldn’t be that difficult.

It’s all about appealing to the juror’s common sense and once they put themselves in your shoes and start thinking about themselves being nervous or being on medication or driving home from work, it won’t be too difficult for their common sense to start taking over.  Hiring an experienced trial lawyer is your smartest move.

If you If you have been charged with a drinking and driving offense (OWI) in the Oakland, Wayne, or Macomb county communities of Royal Oak, Bloomfield Hills, Detroit, Warren, Troy, Sterling Heights or any surrounding area and want the best OWI defense attorneys, call The Law Office of Barton Morris today.