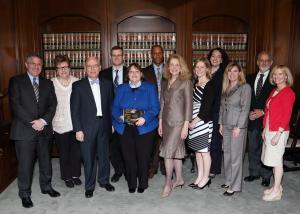 On May 23, 2013 Barton Morris attended the Eastern District of Michigan Federal Bar Association quarterly Book Club meeting. The Club had a lively discussion of The Oath: The Obama White House and the Supreme Court written by Jeffrey Toobin. The book depicted a very behind the scenes look at the Chief Justice John Roberts United States Supreme Court in relation to Barack Obama’s ascendency to the presidency. The volume culminated in the Supreme Court’s 2012 ruling that the Affordable Care Act (Obama Care) was in fact constitutional and the fascinating speculation why Chief Justice Roberts ruled in favor of the historic legislation. The meeting took place in the Federal District Court in Detroit.

Our meeting discussed the possible reasons why Chief Justice Roberts changed his mind seemingly at the last minute and to the surprise of the conservative justices, ruled in favor of Obama’s health care plan. 15 people were in attendance including five District Court Judges including Avern Cohn, Mark Goldsmith, Arthur Tarnow, David Lawson, and Marianne Battani.

The title of the book “The Oath” was a reference to Barack Obama’s second presidential oath of office that Chief Justice Roberts administered on Inauguration Day but a mistake was made during its reading. Because the oath is a constitutional requirement it had to be re-administered privately later in the White House to ensure the President was constitutionally secure in his position. This event set the back drop of the in depth examination of both men, their similarities and difference and the ACA landmark decision.

The book and the club discussed the protracted appointment of federal judges in vacancies by the Obama administration. All of the district judges in attendance had been through the appointment confirmation process and noted that it can be lengthy – they had interesting opinions regarding Obama’s agenda with appointments. Also interesting was Judge Tarnow’s assertion that none of the current Supreme Court Justices have any practical criminal law experience.

READ  Is Reckless Driving a Felony?

Overall the FBA’s book club was an incredibly interesting event. A lot of very intelligent people discussing details of the politics of this country’s highest governmental institutions was fascinating. The next book the FBA Book Club will be discussing The Lawyer Bubble: A Profession in Crisis by Steven J. Harper in the Fall of 2013. Barton Morris will be there.